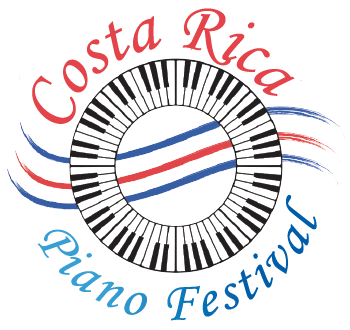 Finally, after 2 years of Covid and missing the festival, I was able to attend the Costa Rica Piano Festival in San Jose, Costa Rica. I also finally got to meet Lanzo Luconi, the founder of this wonderful festival and learn about the amount of effort and trials it took to get the festival to where it is today. 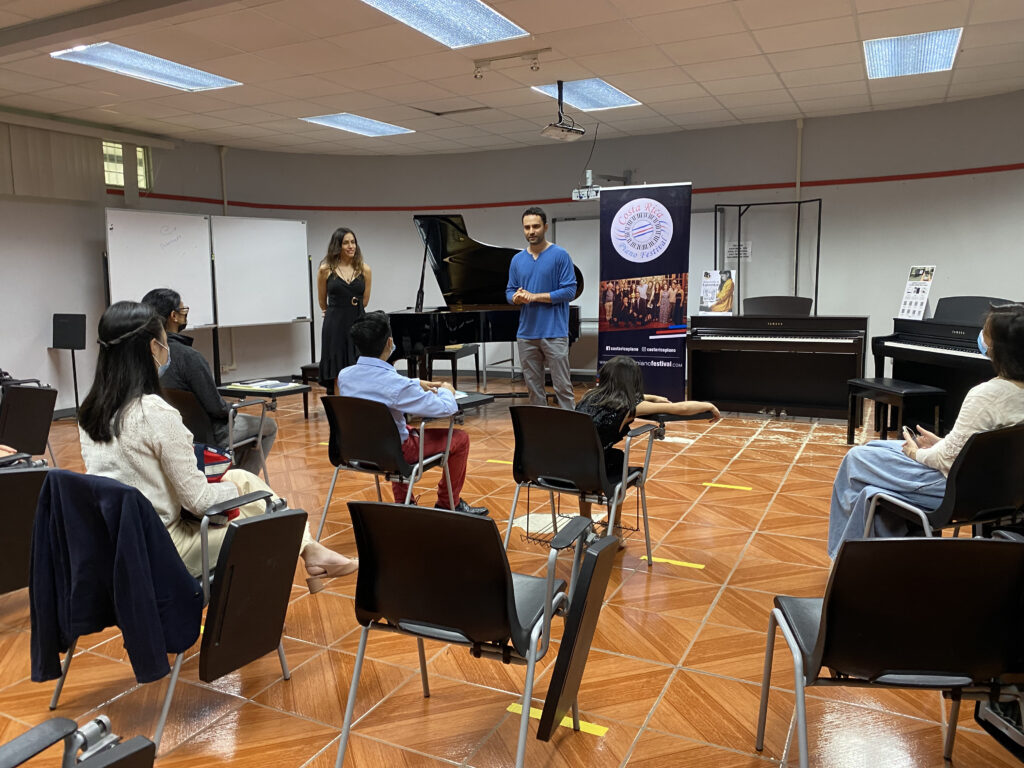 This year the festival is still somewhat scaled back because the planning takes place so far in advance and it was uncertain how much Covid would still affect travel and public events. But it was such a worthwhile opportunity to see the artists working with young students as well as a fabulous concert. 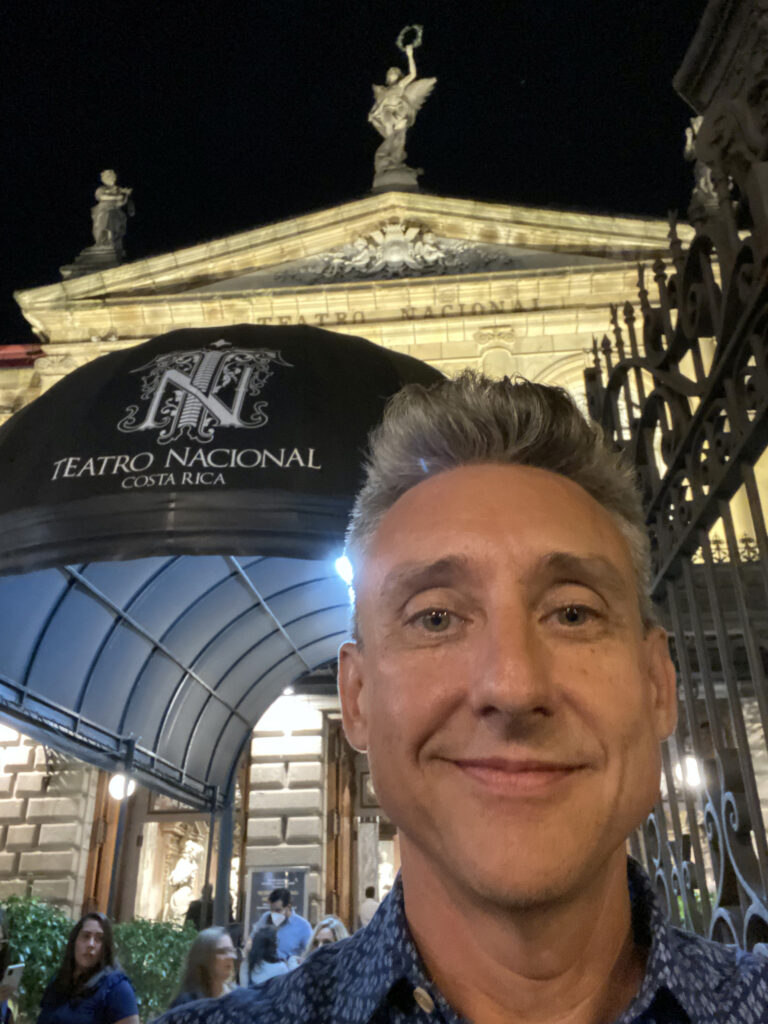 First I was excited to finally get a glimpse onto the campus of the Universidad Nacional de Costa Rica. Its as fun to be in a music building and hearing notes floating on the air again. This was the location of the masterclasses. Columbian Pianist Ana María Orduz was incredible in her approach to the young students. He use of imagination and imagery to connect musical concepts to technique was effective and inspiring. It was also great to see such young talent excelling on piano in a country where pianos of quality can be scarce. 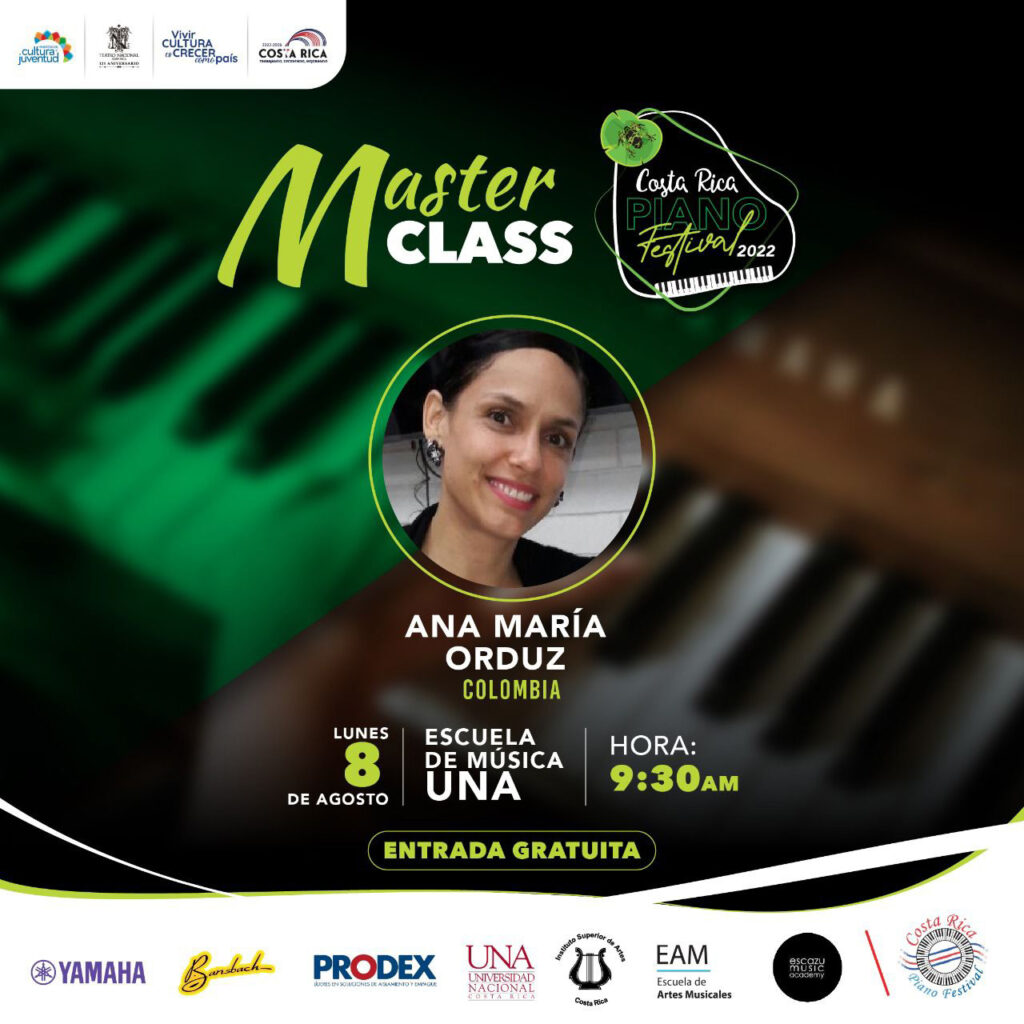 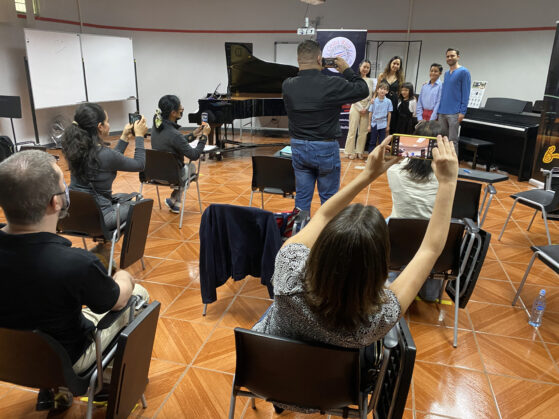 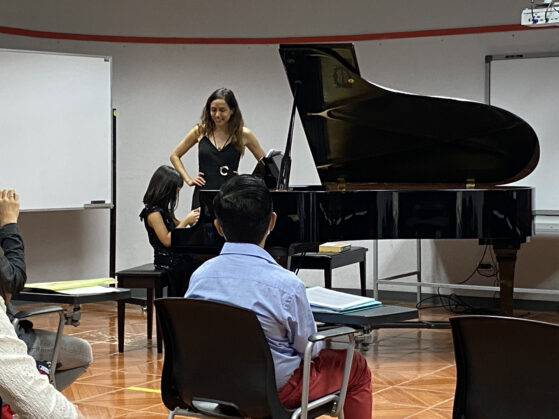 The concert was also a pleasant surprise. The quality performances were not a surprise – those were expected. But what surprised me was the modern repertoire and the friendly, approachable demeanor of the performers. They took time to chat about the pieces and even make some jokes with the audience. The musician friends with whom I attended told me the second performer, Jacques Sagot, is a Costa Rican legend, and were so happy he took time to sit on the front of stage and joke and chat about Liszt. 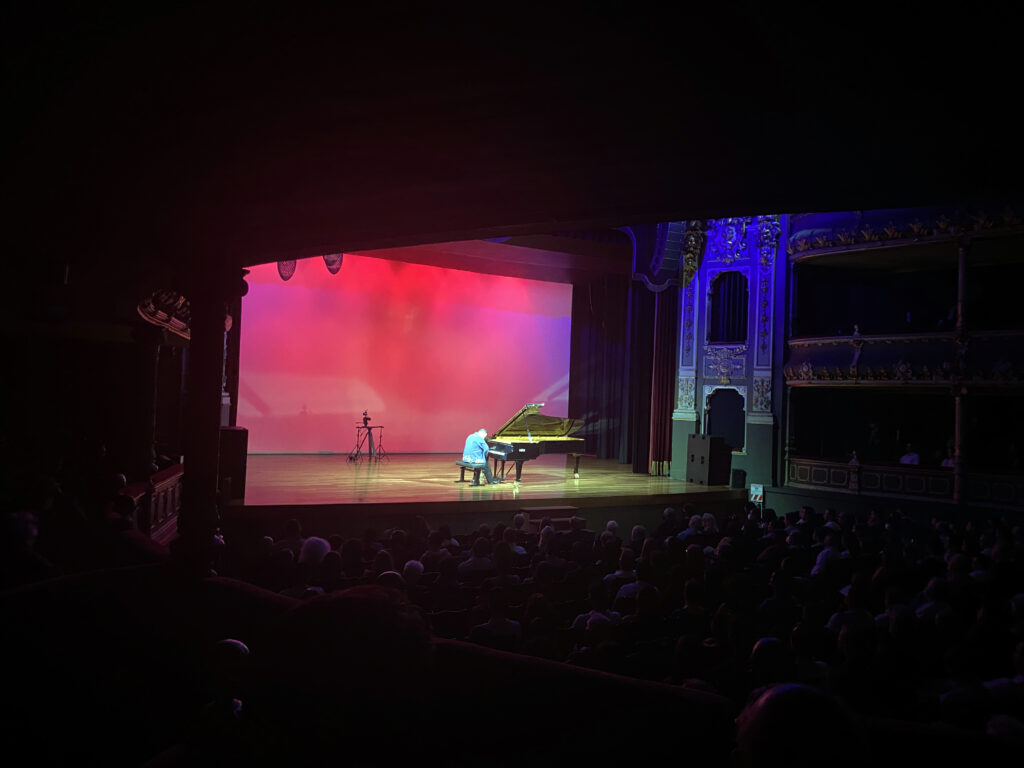 The concert took place in the Teatro Nacional, a national and historic landmark from the colonial era. It was a beautiful building with all the decorum of a museum inside. We had seats in a side box with an excellent view of the stage and piano keyboard. The piano and acoustics were quite good, and of course the playing was impeccable. It was an engaging mix of Romantic and modern music which I thoroughly enjoyed, though I have to admit I was particularly taken with the Suzuki piece as well as the two latin pieces by Cervantes and Vega. 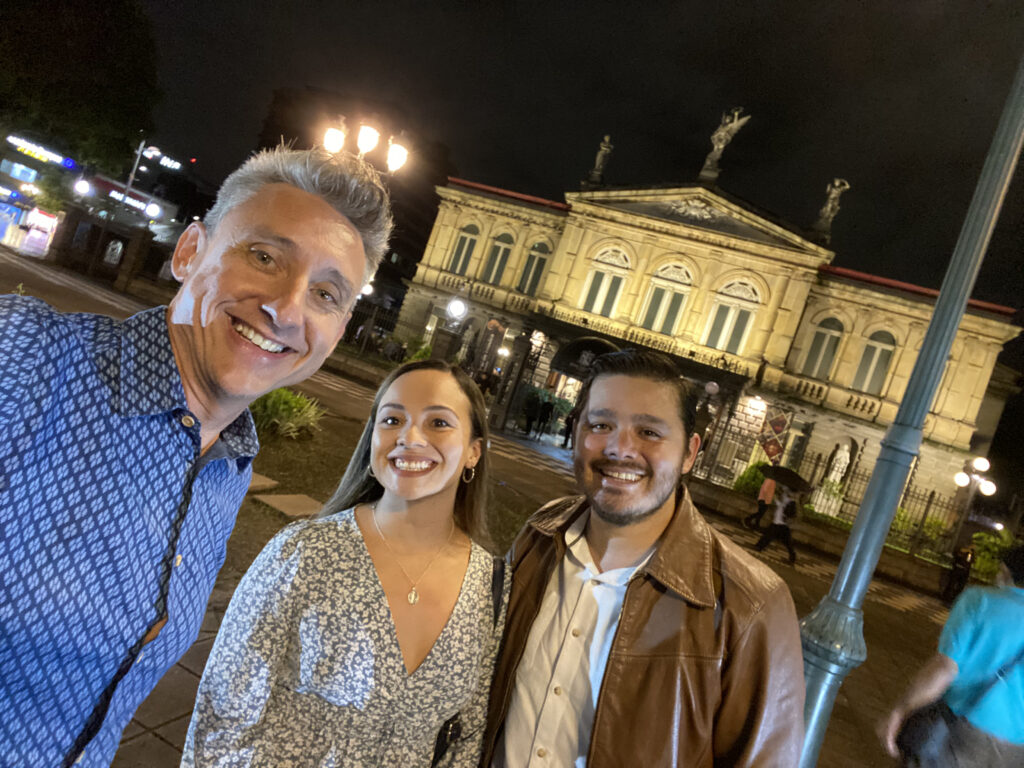 This was such a great experience and I hope to do it again next year, hopefully even sending an American student to the festival. My only complaint is that it happens late enough in the summer that I cannot stay for all of the events because I have to return to work. 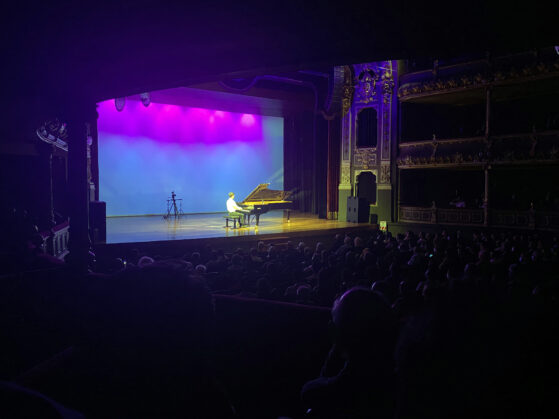 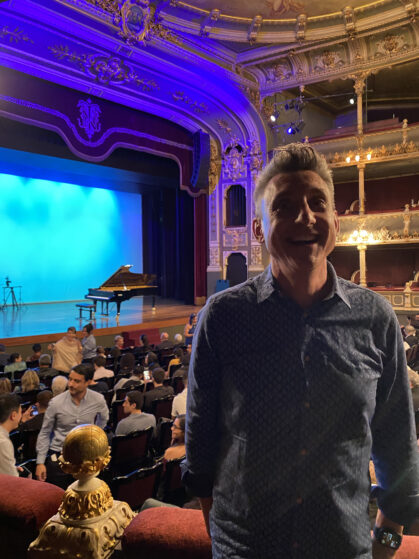 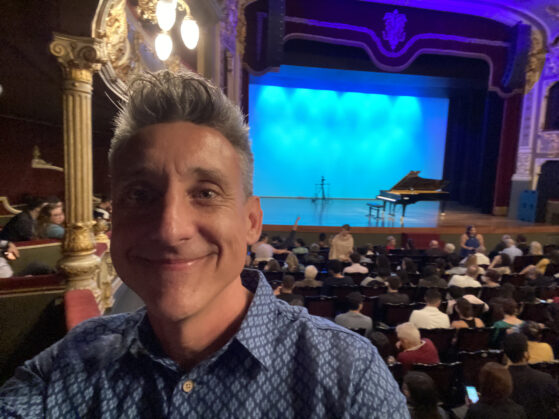 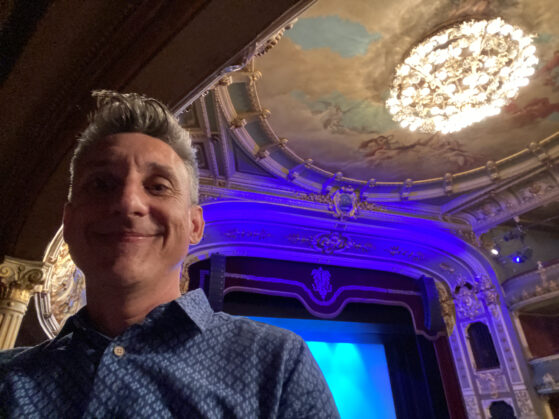 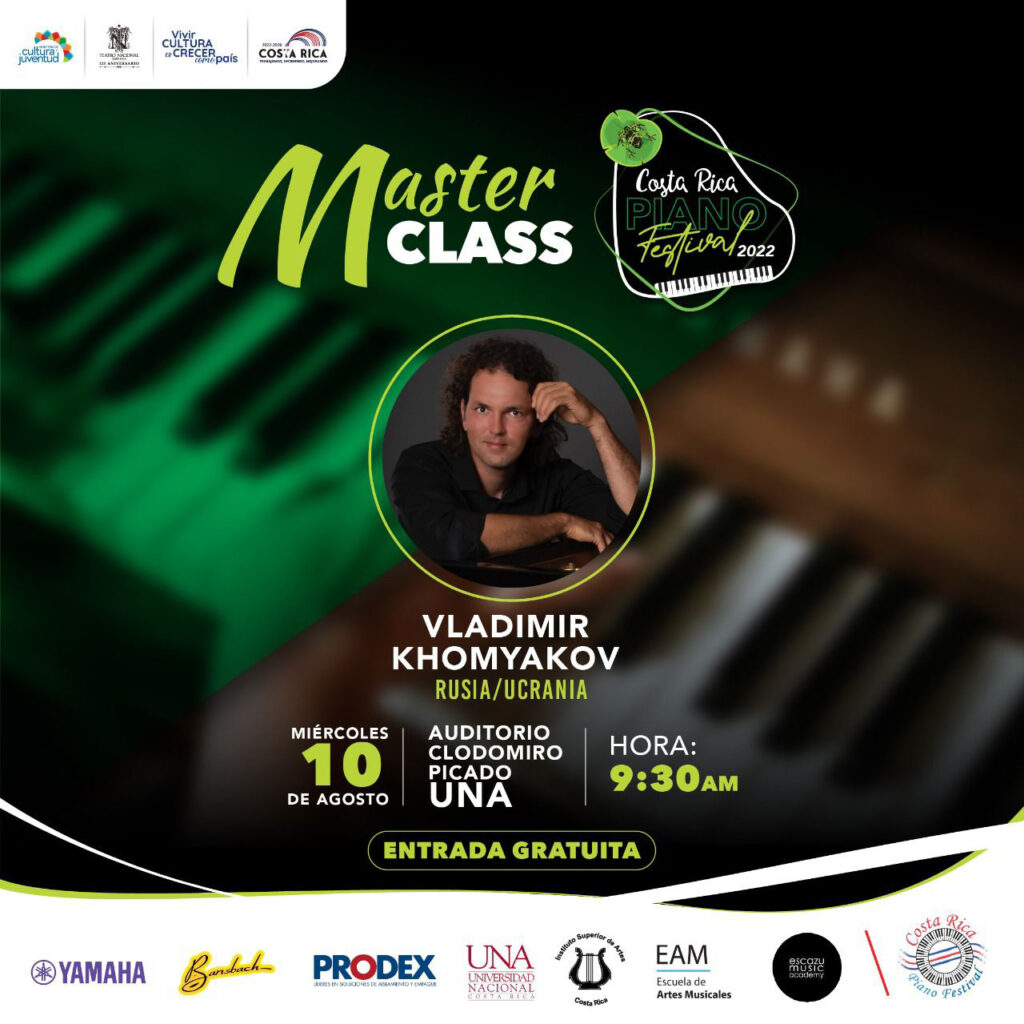 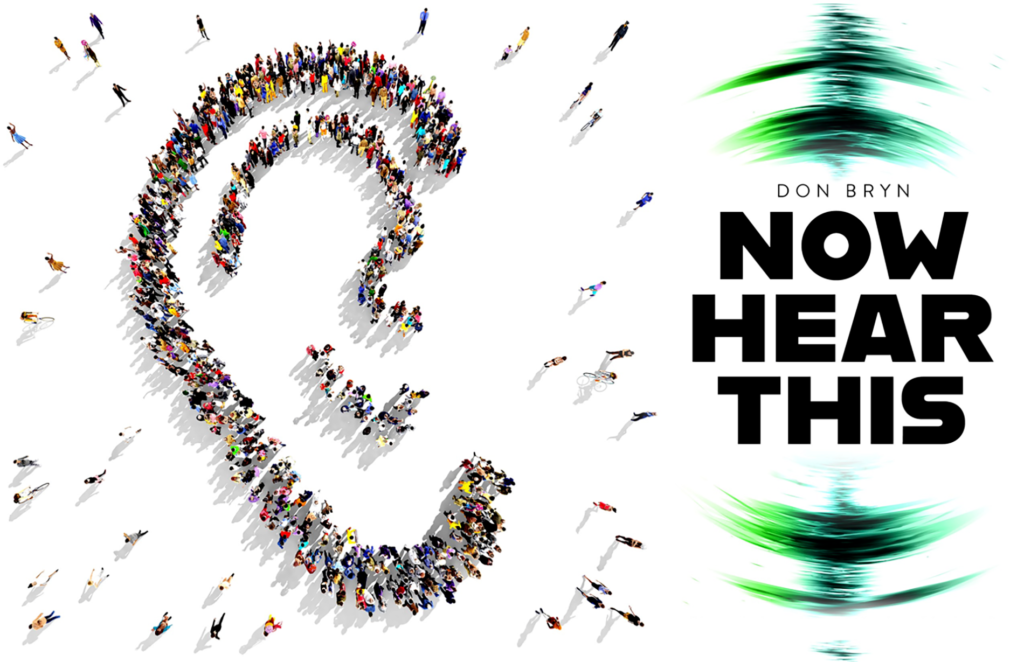 (Bradenton, Fla., Feb. 24, 2022) — State College of Florida, Manatee-Sarasota (SCF) recognized Don Bryn, instructor of music, for the publication of his new textbook, “Now Hear This.” The 13-chapter text engages students and encourages critical thought and excitement about music and how to overcome cultural and psychological resistance to unfamiliar music.
Bryn’s textbook is published by Great River Learning. In addition to the theme of confronting biases students may have against exploring genres and eras of music they may not particularly care for, the historical context of music through the ages is explored. Chapter quizzes and a final exam are included to make the text a viable standalone learning tool for online courses, while also having value for face-to-face and blended instruction methods.
SCF offers a two-year associate degree in music that is designed to for students planning  to pursue a four-year music degree at the university. Additional opportunities exist for music majors and non-music majors alike to participate in ensembles or private lessons. 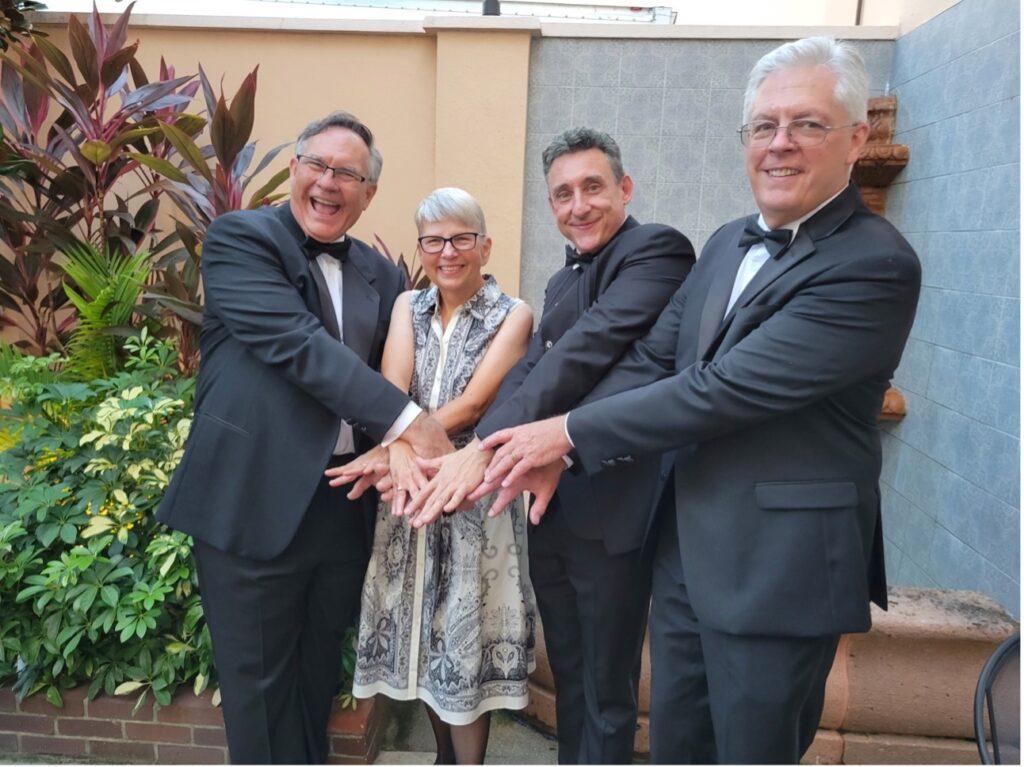 Overture to the Barber of Seville, Rossini

Over the Rainbow, Arlen

You’ll Be Back, Miranda 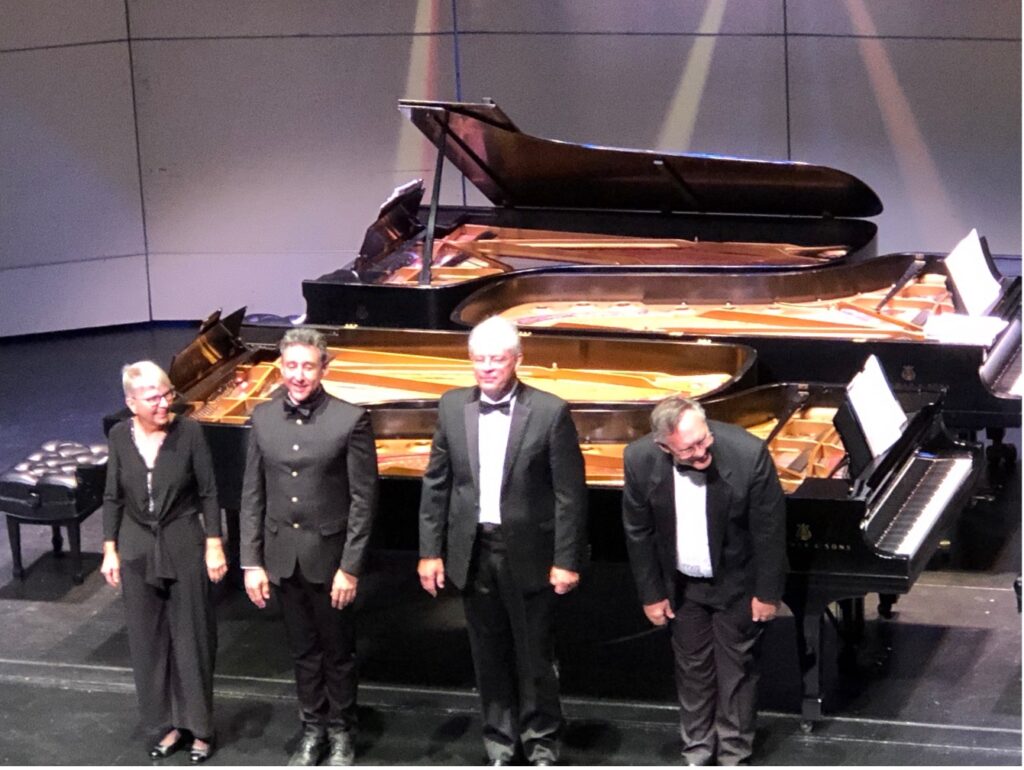 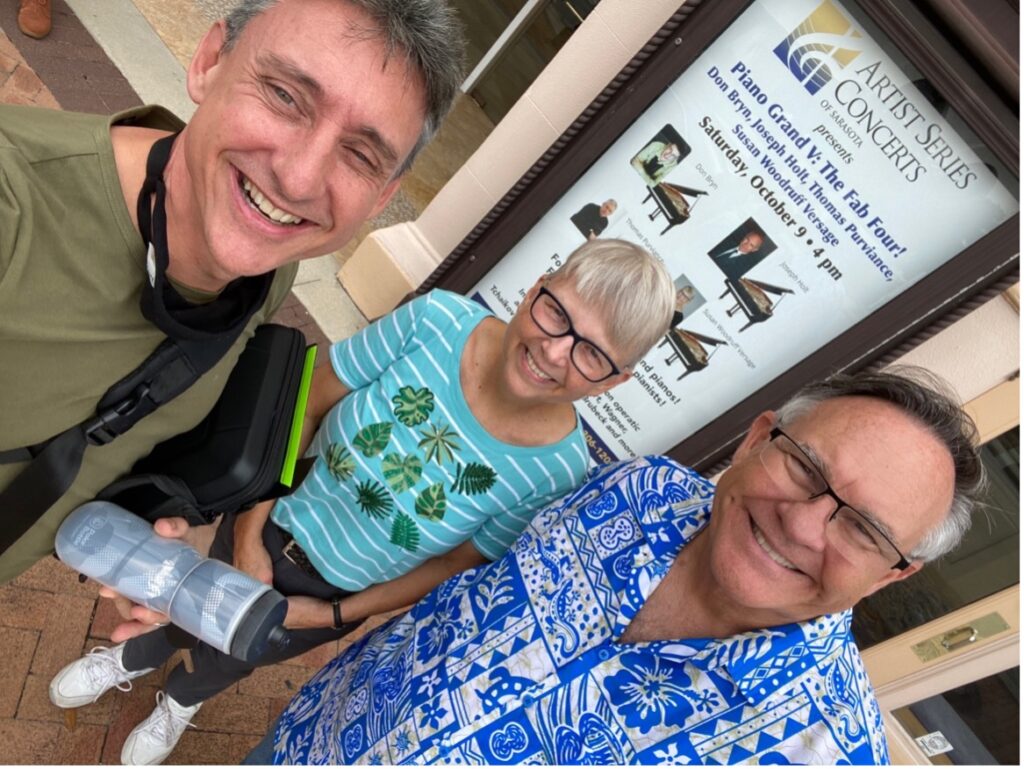 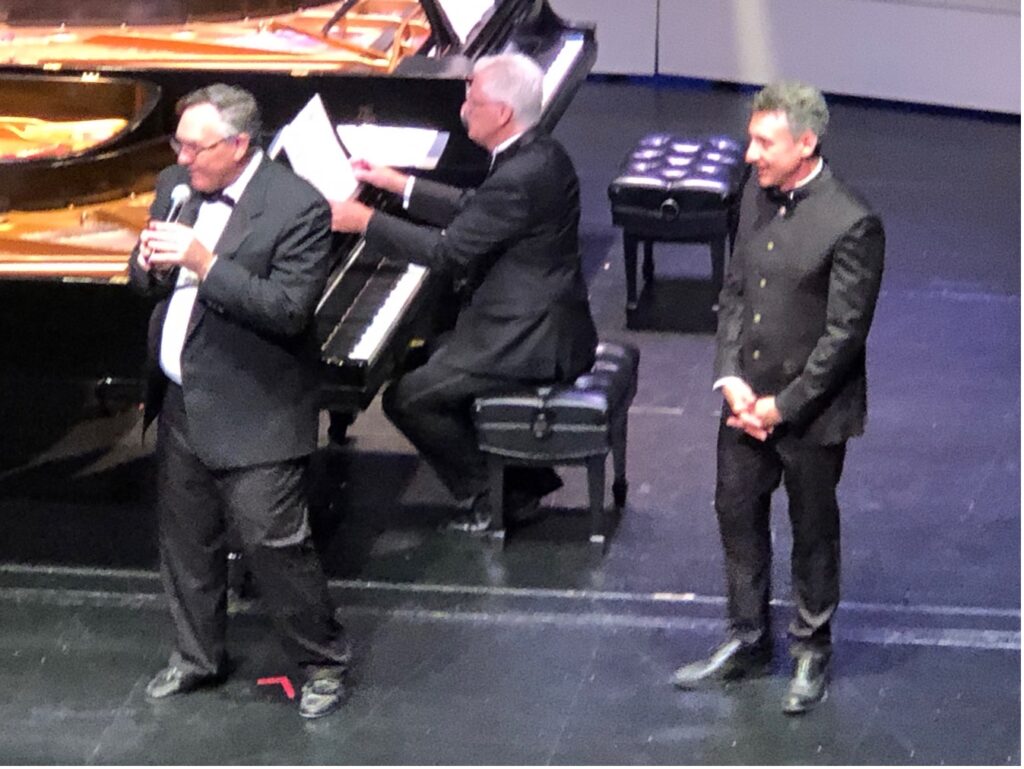 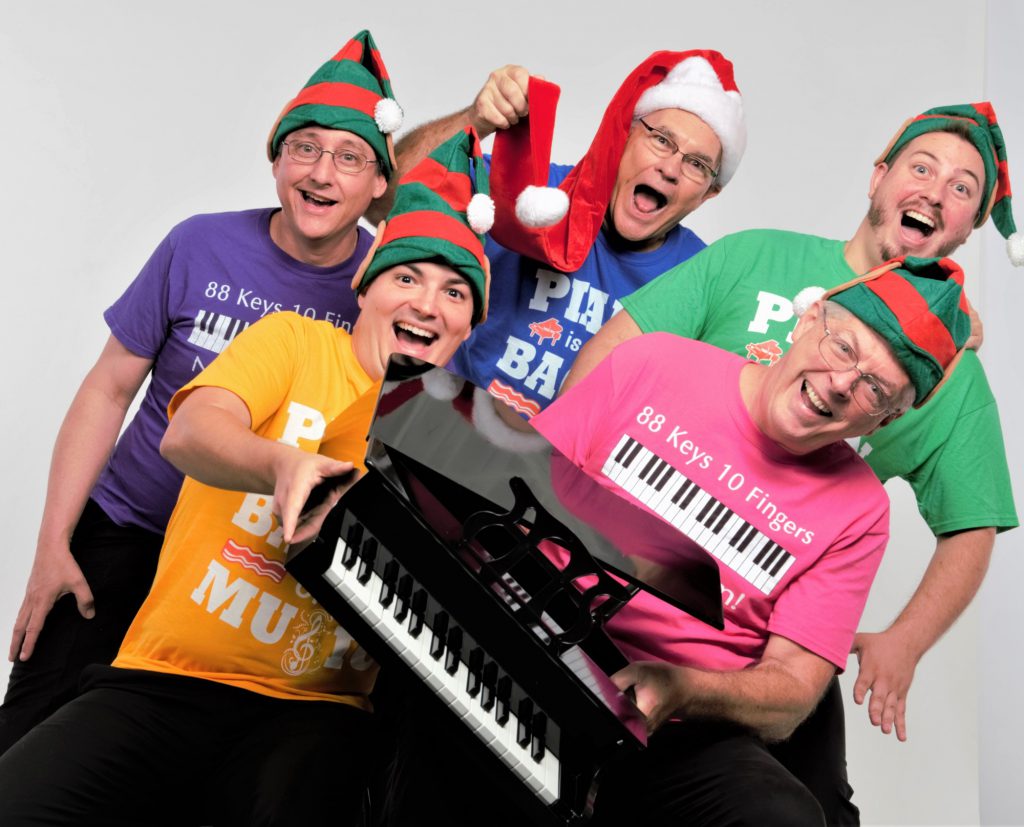 Piano Grand IV is destined to be popular as a holiday concert! Again we had another sold-out performance at the Sarasota Opera House.

Piano Grand gets a holiday twist

Artist Series Concerts brings together five grand pianos and five pianists for a mix of classics, holiday favorites and an audience sing-along

Five pianos, ten hands and a lot of holiday favorites, including a sing-along, will greet audiences for “Piano Grand IV,” the latest version of Artist Series Concerts of Sarasota’s popular series.

The first three concerts were presented in October, but “Enough people had said ‘we are always missing that performance because it’s in October’ so that’s why we moved it to December and I decided to do the holiday edition of it,” said artistic director Dr. Joseph Holt.

For the past three years, Steinway & Sons grand pianos have been delivered straight from New York City for local pianists to play on the Sarasota Opera House stage.

“I could have chosen the winter version from the Four Seasons but I opted to choose a different piece because I thought it would actually show the effect of winter with rain falling,” Holt said.

The concert will also include popular pieces like Leroy Anderson’s “Sleigh Ride” preceded by a Russian version. It will feature a bells of Christmas medley, Christmas carols and an opportunity for the audience to participate in a sing-along version of the Hallelujah Chorus from Handel’s “Messiah.”

Holt, a conductor and arranger, said he became familiar with the specific arrangements written for multi-piano concerts through his years as a pianist for the United States Army Chorus in Washington D.C.

Since the series’ start in 2015, educator, arranger and composer Don Bryn and Steinway Artist and composer Andrew Lapp have accompanied Holt for the sold-out performances. Thomas Purviance, a Lizst, Chopin and Rachmaninoff expert, joined the group in 2017.

“There is an incredible amount of extraordinary musicians that live in this area and it’s a little bit of a challenge to find the right people to do this because there are so many that could,” Holt said.

This year, the pianists have welcomed Michael Stewart, the group’s newest and youngest member. Stewart is the pianist for the Choral Artists of Sarasota and a teacher at Manatee School for the Arts.

“Whenever an opportunity arises where multiple pianists can play together it’s a true joy and pleasure,” Stewart said. “It’s going to be a fun way to usher in the holidays and get into the Christmas spirit.”

I performed jazz piano with a student combo for Joshua Adler’s jazz composition. This performance was part of a student recital during recital seminar class. 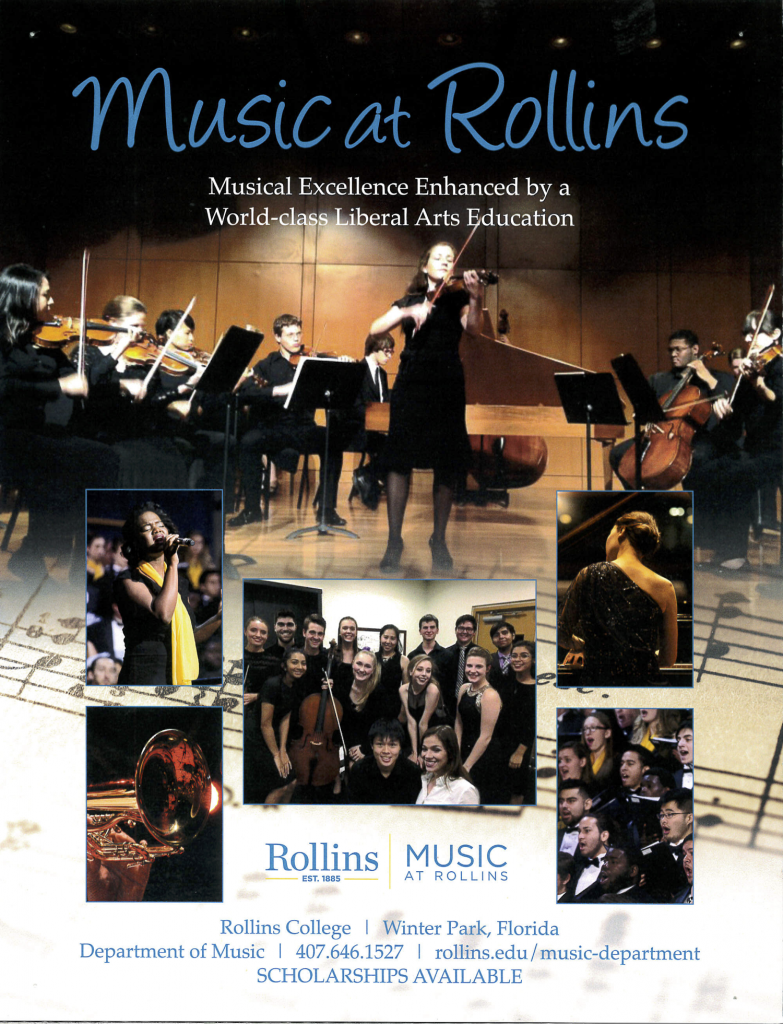 My connection with Sylvia Eckes of the Sarasota Music Archive and the International Grieg Society produced another connection with Gloria Cook at Rollins College.  Gloria was invited to present a piano masterclass on March 15, 2019.   All students were invited to attend, and all piano students in studio class were required to attend.

This was a highly successful masterclass, with 2 of our piano majors playing and working with Gloria.  Gloria was gracious and informative, especially giving out students a larger sense of piano pedagogy and the many possible lines of thought that exist in the development of piano technique.

I played a run of around 20 performances of “The Wonder Years” for Florida Studio Theater with this wonderful cast of performers and technicians. I have been asked to play for shows at FST a few times, but I cannot usually work out the availability for such a length of time. Thankfully this time I was able to do the run and had a great time. Reviews were good and it seems all performances were full or sold-out.

Ah, the Baby Boomers. Not merely the original young generation — the original youth market. Starting in the 1950s, that pop culture Godzilla stomped its way across America’s music, movies, fads and fashion. “The Wonder Years: The Music of the Baby Boomers” manages to fit that monster on the tiny Florida Studio Theatre cabaret stage.

The farrago of fan service begins with high-energy dance music. Then it turns on the TV with a barrage of themes from “Howdy Doody,” “Davey Crockett” and other 1950s “kiddie shows.” This sweetly infantile legacy has been satirized by everyone from Thomas Pynchon to the writers of Mad Magazine. But this revue plays it mostly straight.

Mickey Mouse memories segue to adolescent growing pains. The first wave of Boomers hit high school in the 1950s and it shows. Hormonal hopes and horrors filled their minds and music. Hard-hitting topics include nagging parents (The Coasters’ “Yakety Yak”), teenage rejection (Lesley Gore’s “It’s My Party and I’ll Cry if I Want to”) and love, love, love (Sam Cook’s “You Send Me,” The Platters’ “Only You,” and Connie Francis’ “Where the Boys Are.”) After another gyrating dance set, the revue offers a hagiographic ode to Elvis. (“Hound Dog, “Don’t Be Cruel, “All Shook Up,” and “Jailhouse Rock.”)

Stacey Harris has also performed on Broadway in “Bells Are Ringing” and on national tours of “Cinderella,” “Show Boat” and “Dreamgirls.” Photo by Matthew Holler

After a nod to the twilight of the 1950s, the revue tunes into 1960s television. (Adult TV shows, at least in theory.) Earworms include the themes from “Bonanza,” “The Dick Van Dyke Show” and “I Dream of Jeannie.” (Not “Gilligan’s Island,” in case you were worried.) The British Invasion then crashes America’s rock ‘n’ roll party with blasts from The Beatles and The Stones. (Mick “Can’t Get No Satisfaction” and the Moptops want to “Hold Your Hand.”) Starting in the mid-’60s, love takes a walk on the wild side. (Ray Davies meets “Lola” and Jim Morrison wants to “Light Your Fire.”) The decade hits the home stretch with a nod to feminism (Nancy Sinatra’s “These Boots are Made for Walking”), an uneasy look to the future (David Bowie’s “Space Oddity”), and two anthems of protest (Stephen Stills’ “For What It’s Worth” and The Byrds’ “Turn, Turn, Turn.”) It ends with Steppenwolf’s “Born to Be Wild.” What else?

It’s a fun revue. And perhaps too ambitious. It skips around in time. And there are a few conspicuous omissions. No Hendrix; no Dylan; no Beach Boys. Sex and rock, yes. Drugs, no.

“The Wonder Years” is incomplete. But that’s to be expected.

Baby Boomer culture truly was a monster. It’d take a six-hour Ken Burns schedule to do it justice. This revue covers two decades in 90 minutes.

Unlike the decades in question, it’s fun from start to finish. 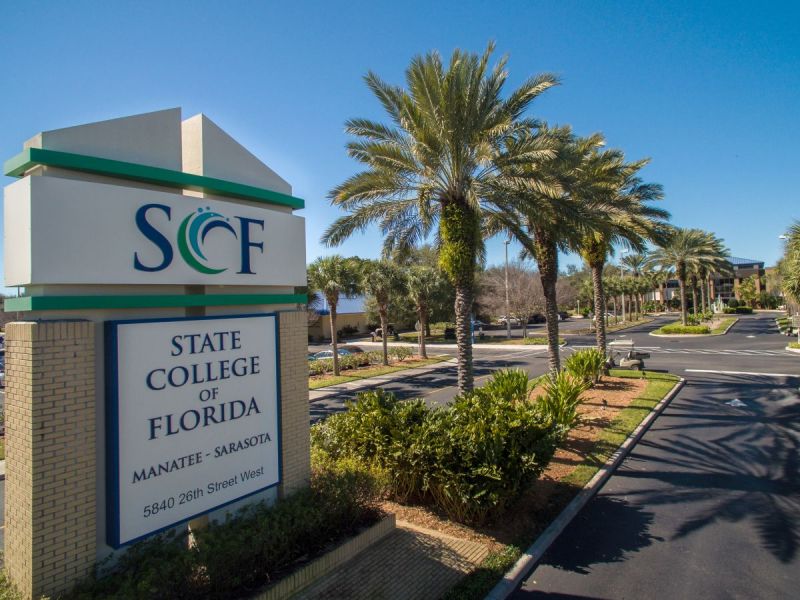 What a great way to keep open communication. I enjoyed the talk and observing the etiquette for l informal academic meetings such as this. 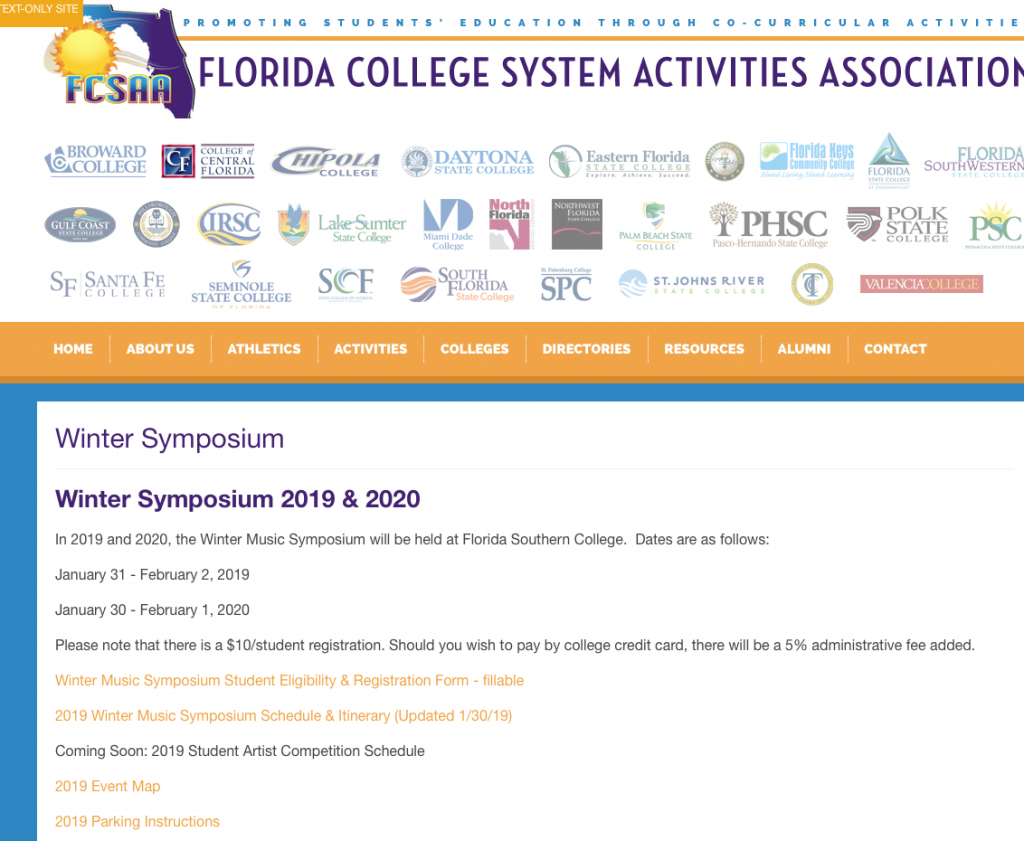 We made our annual 3-Day trip to the annual student symposium.

I performed with the student jazz combo to support Luca Stine’s preparations for the student artist competition.  The students enjoy the opportunity to play with jazz piano.  I was also set to play with the jazz combo for winner Luca Stine at the symposium winner’s concert but the Florida Southern teacher somehow inserted himself and Luca was unsure how to respond.